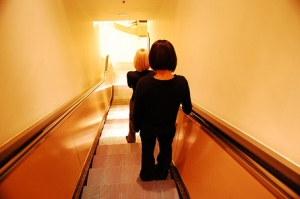 An LA Times/Bloomberg poll reports that a whopping 75% of Americans blame Bush for the economic downturn:

Three out of four Americans, including large numbers of Republicans, blame President Bush’s economic policies for making the country worse off during the last eight years… reflecting a sharp increase in public pessimism during the last year.

The LA Times also reports that Bush’s approval ratings are currently at “just 23%” — an all-time low. We find it shocking actually that nearly 1 out of 4 Americans STILL approve. Shouldn’t this rating be a low single digit after 8 years of shockingly awesome mechanisms of fear and greed?

Just 5 more months of this dynasty.