Castro on Obama, Hunger, and Consumerism

The rumble for Florida’s votes is on and the winner may depend on what Miami’s Cuban immigrants see as the future of their motherland. Clinton, Obama, and McCain are sparring over how they will deal with Fidel Castro, now 81, and younger brother Raul, who formally assumed the presidency in February 2008. Mirroring the majority of immigrants’ sentiments, Clinton and McCain are vowing not to deal with the socialist republic until it introduces more democratic reforms. Obama is going against the grain, pledging to open up official lines of communication with the most populous nation in the Caribbean.

In the past, the older Castro has voiced his support of Obama and an Obama-Clinton ticket. However, in a surprising Reuters report today, Castro criticized Obama’s speech in Miami last Friday wherein Obama called for lifting restrictions on travel and money transfers to Cuba. Castro, as quoted by Reuters:

“Obama’s speech can translate into a formula of hunger for the nation (Cuba), the remittances like alms and the visits to Cuba as propaganda for consumerism and the unsustainable lifestyle that he sustains.

“How is the very grave problem of the food crisis going to be confronted? Grains must be distributed among human beings, domestic animals and fish, which year by year are smaller and more scarce in the over-exploited seas,” Castro said. “It’s not easy to produce meat from gas and oil.”

Castro is pointing out the dangers of rhetoric and smooth talk, which is Obama’s Achilles heel. But I wonder how much Castro himself has been able to stop the tide of consumerism within Cuba. Here’s a photo of Castro published by Reuters in a separate article. It was apparently taken by Brazilian President Lula during their meeting in Havana in January. Why is Castro wearing an ADIDAS track top? One might consider this a very successful case of advertising or product placement, aka “propaganda for consumerism”. Not good: a picture is worth a thousand words. 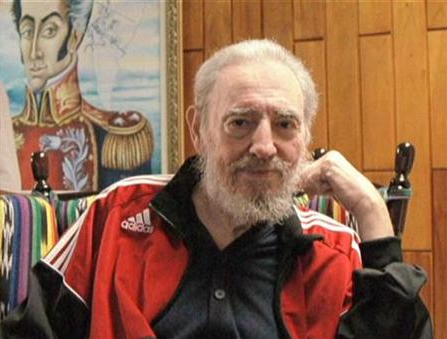 Adidas, of course, knows best. The company’s got an “Adidas Cuba Retro Track Top” for soccer fans and Cuban loyalists.

This Cargill ad on msnbc.com yesterday read: “Cargill is helping new ideas emerge from nature. Find out how at cargillcreates.com“. So I clicked.

The site’s predominant color is green, a direct allusion to nature and sustainability (envy and inexperience, too, but that’s another story). The tagline reads “collaborate > create > succeed”, followed by “TM” for trademark, a symbolic claim to private property that has served Cargill extremely well. Case studies based on this so-special-let’s-trademark-it formula abound. In “collaboration” with its customers, Cargill has “created”: a new bread, a better burger, more flavorful pork, cholesterol-reducing milk, a new line of whole-grain cereal, a new crop of corn, a better foam, better feeds for dairy cows, better tasting sugar-free chocolate, better processed eggs, better quality beef for supermarkets, better frozen foods, better baby formulas. Even a better delivery system for refrigerated products in Central America. Success!

But what is “new”? Who defines what is “better”, for whom, and at what cost? These case studies are success stories for the customers Cargill serves: corporations and neoliberal economic policies. A “new” crop of corn or a “better” egg means genetically-modified substances that can be produced more consistently at increasingly lower prices, with more controlled shelf lives. These invariably benefit first world producers, NOT consumers (and third world consumers far far less). Even supply systems that appear to benefit difficult-to-reach communities are, in fact, channels intended to create more markets and thus, ring in more sales.

As America’s second largest privately-held corporation (where descendants of its founders still own about 90% of the company; the rest is owned by employees), Cargill holds unimaginable political and economic power over the world’s population and answers to a very exclusive and very privileged few. “Cargill creates” also means Cargill destroys. Its direct involvement in the deforestation of the Amazon, enclosure of the worldwide commons, active support of free trade and neoliberalism, and lobbies for opening up markets in China, Brazil, and Cuba, MUST be watched, tracked, discussed—and challenged. Another world is possible.