No ought from an is. David Hume said that in the 18th century. Just because a thing is the way it is (up until now) does not mean it ought to be that way (into the future).

Yesterday, the Supreme Court of California overturned two state laws that restricted marriage to unions between a state-approved man and a state-approved woman. The vote was 4 to 3. (6 of the 7 justices, including all dissenters, were appointed by Republican governors.) Voting with the majority, Chief Justice Ronald M. George wrote the opinion. He makes a case for why tradition (what we’ve done in the past) is not sufficient justification for discrimination (click here for full text pdf):

“…Although, as an historical matter, civil marriage and the rights associated with it traditionally have been afforded only to opposite-sex couples, this court’s landmark decision 60 years ago in Perez v. Sharp (1948), 32 Cal.2d 711 — which found that California’s statutory provisions prohibiting interracial marriages were inconsistent with the fundamental constitutional right to marry…—makes clear that history alone is not invariably an appropriate guide for determining the meaning and scope of this fundamental constitutional guarantee. The decision in Perez, although rendered by a deeply divided court, is a judicial opinion whose legitimacy and constitutional soundness are by now universally recognized.”

An individual’s right to marry the person whom she/he has chosen and establish a family “encompass[es] the core set of basic substantive legal rights” and is “integral to individual liberty and personal autonomy”:

“…in view of the substance and significance of the fundamental constitutional right to form a family relationship, the California Constitution properly must be interpreted to guarantee this basic civil right to all Californians, whether gay or heterosexual, and to same-sex couples as well as to opposite-sex couples…”

There is no compelling state interest for differential treatment. Further, it engenders harm and illegally sanctions discrimination:

Massachusetts and California down. Next stop: Connecticut.
(New York: He-llo. What’s up?)

The LA Times ran an article today: “Teacher Fired for Refusing to Sign Loyalty Oath”. It seems that 38-year-old Wendy Gonaver has been relieved of her teaching posts at California State University/Fullerton because she declined to sign an oath to “support and defend the Constitution of the United States and the Constitution of the State of California against all enemies, foreign and domestic.” A Quaker and a pacifist, Gonaver believes that the pledge violates her freedoms of speech and religion. She was not allowed to make any amendments, leaving her to choose between pledging allegiance to government or to her personal and religious beliefs. She chose not to sign.

According to the LA Times, all state, city, county, public school, community college and public university employees (about 2.3 million people) are required to sign California’s loyalty oath. (Curiously, non-citizens are exempt. Go figure.) No records are kept on how many citizens are denied these jobs because they refuse to sign.

California’s constitution starts off with the declaration of rights. Two sections seem directly relevant to this story:

Section 1: All men (!) are by nature free and independent, and have certain inalienable rights, among which are those of enjoying and defending life and liberty…and pursuing and obtaining safety and happiness.

Section 4: The free exercise and enjoyment of religious profession and worship, without discrimination or preference, shall forever be allowed in this State: and no person shall be rendered incompetent to be a witness on account of his opinions on matters of religious belief…

It seems strikingly odd that one should be stripped of these rights when one refuses to sign an oath pledging allegiance to defend these same rights. Well, at least we’ve still got New Hampshire! 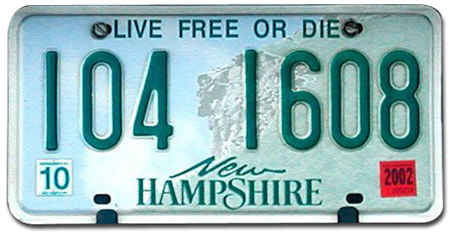