In The Guardian: A French court has ordered online auction site eBay to pay luxury goods giant LVMH (Louis Vuitton Moët Hennessy) a whopping €38.6 million euros in damages for negligence. eBay is charged with allowing independent retailers to use its site to sell fake products.

eBay is to pay €19.28 million to Louis Vuitton Malletier and €17.3 million to Christian Dior Couture for “damage to their brand images and causing moral harm.” Another €3.25 million goes to four LVMH perfume brands for “sales in violation of its authorized network.”

Can someone explain how sales of fake goods cause “moral harm”? Another bout of corporate ridiculousness.

eBay has appealed the ruling, arguing that LVMH is using the specific issue of counterfeits to attack the general trend towards e-commerce and to maintain (declining) control over the brands’ primary sales channels.

Other brands are hovering like vultures: Hermes, Tiffany & Co., and L’Oreal are all suing eBay for similar damages.

Luxury brands that cater to privileged elites (or the wanna-be-privileged elites) don’t mix very well with e-commerce or web platforms, which are largely driven by the mass populace. While the former relies on exclusivity, uniqueness, and tradition, the latter thrives on access, ubiquity, and change. The former would like to keep the latter out — unless of course the commoners are buying directly.

This seems to be what eBay is being punished for: providing an open marketplace for the populace to transact their own goods and services, on their own terms. I’d say it’s the best real-time representation yet of market supply/demand, property valuation, as well as socio-cultural trends.

Keep our common markets free. Will we ever evolve from the Dark Ages of Extreme Luxury and Corporate Greed?

Saw Pixar’s newest animated movie “WALL-E” at a MoMA preview on Sunday. Directed by Andrew Stanton (who won an Oscar for Best Animated Feature, for “Finding Nemo” in 2003) and released by Disney, the animated narrative unfolds around two robots, WALL-E and EVE. It’s (shall we anthropomorphically call it…) a love story set in a dystopic and divided auto-consumerized future, which eventually becomes the ground for a new, more human, Earth.

Hands down: the animation is gorgeous. You know something’s picture-perfect when you don’t even think it’s an animated production. I still remember seeing-but-not-believing its first animated feature “Toy Story” back in 1995. “Wall-E” is Pixar 2008 and Disney 21st Century. Baudrillard might have called it a simulacrum so seamless you forget it’s a fiction. There are moments in the first part of the film when you really think there’s a crew filming WALL-E’s dust-ridden, junk-filled terrain.

WALL-E itself is a friendly garbage-collecting-robot that looks strikingly like Johnny 5 in “Short Circuit” (1986). It’s the last remaining robot on Earth. It’s been tirelessly doing its job for about 700 years. (Since the movie is set in the year 2700, we might assume that the writers are trying to tell us that WALL-E was probably created right about now.) It’s got a soft spot for old-fashioned romance musicals.

Suddenly, WALL-E encounters EVE, a futuristic cyborg/militarized automaton who has landed on Earth to look for sustainable life. WALL-E’s got it, in the form of a single plant. EVE, it turns out, is a probe from a spaceship in which the last remaining humans are consuming themselves into an overweight and immobile oblivion. The two robot-opposites attract and the rest, as they say, is history. Or maybe the future.

What do we expect from Disney? It’s a classic love story, along the lines of Beauty and the Beast or Cinderella. Set against an environmental catastrophe and “An Inconvenient Truth”. Disney sure knows how to tug at them heartstrings — a lot for a movie with minimal dialogue.

While I did honestly enjoy “WALL-E”, I also found myself asking how much it illuminates our current state of affairs: I’m watching a love story about two inanimate machines, who are somehow more human than humans. I’m looking at the effects of hyper-consumerism and technology-driven simulation — through a Disney/Pixar creation. And I’m facing a screen, blogging about this to a largely-unknown group of readers. We are living the foundations of this science fiction. WALL-E mirrors our time.

Green has been coopted as the new black. And the race is on to find “sustainable” means to travel more efficiently, quickly, and quietly along the earth’s surface. For a world increasingly hooked on speed and mobility, visions of utopia seem to be appearing in the shape of mass-producible compact cars powered by alternative — or cheaper — fuel sources.

BBC reports today that Honda of Japan is set to produce the first zero-emission, hydrogen-powered car. Branded FCX Clarity, the four-seater will run on fuel cells powered by hydrogen and electricity.

In the past six months, we’ve read about: the LIFEcar, a gorgeous, lightweight hydrogen-powered sports car being developed by UK’s Morgan Motor Co.; India’s Tata Nano aka “the people’s car”: high on fuel efficiency and low on emissions at a price tag of $2,500; and American GM’s ethanol-ready flexfuel engine. Lots more to come.

What do these have in common?

Aside from potentially smaller carbon footprints, these models of utopia have NOT changed much from Ford’s original Model T in 1908. They’re mass-produced wheeled units that can transport a family of passengers, have some type of protective and stylized exterior, and carry their own motors that run on some type of fuel.

Ford’s goal then was to get as many of these into as many consumer households. This launched the U.S. auto industry, but also led to the demise of U.S. railroads, i.e., collective forms of transportation.

No doubt, there is a need for these individual traveling units we call cars. But I hope we also start to see energy solutions for collective transportation systems.

The future, to me, lies in hybrid public-private people-movers that rethink the physics of movement, balance, and speed — perhaps a flex-form vehicle that combines and extends beyond the Getty Museum’s monorail, Dean Kamen’s segway, the batmobile, a sailboat, and a tandem bike. Not much to ask! Till then…

Microsoft: The Robots Are Coming 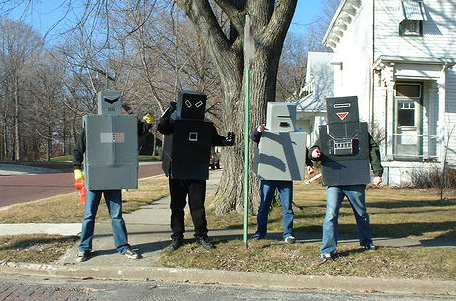 Microsoft Research announced the winners of its “Robots Among Us” request for proposals, a program that looks into the growing field of human-robot interaction or HRI. The eight winning projects were selected from 74 submissions from academic researchers in 24 countries and will split US$500,000 in funding. Each project attemps to further integrate social, intelligent robots into human environments — or should we say, humans into AI/robotic environments. The projects range from PDA-driven intelligent wheelchairs and FaceBots embedded in social networking sites to disaster response robots such as Survivor Buddy for trapped victims and a multi-touch computing platform that can monitor different systems and robots deployed at a disaster site.

Yesterday, Roland Piquepaille on Technology Trends blogged about one of the winners: Robin Murphy of the University of South Florida, who is developing Survivor Buddy, a multimedia, web-enabled robot that can function as “a companion to a person who may be trapped after a car crash or in building ruins following an earthquake, or someone pinned down by sniper fire.” Murphy designed the robots used for urban search and rescue at the World Trade Center site after the 9/11/2001 attacks. The robots were tele-operated and used to enter spaces too small, too deep, or too dangerous for human or canine rescuers. Frustrated with recent disasters in Burma and China, Murphy says: “My dream is that one day you’ll see rescuers and dogs at a disaster site, but if you don’t see a robot, you’ll say, ‘Where are they?’ because they’ll have become so commonplace. They’ll do things dogs and people can’t.”

We’re not in Kansas anymore.

Tech and telecom companies around the world have been betting big on the next frontier: mobile. Today, the NYTimes reports that mobile TV is spreading in the U.S. and Europe as more and more people are watching direct broadcasts on their cellphones, and more and more companies are investing in infrastructure, devices, and programming. Japan leads the direct mobile TV audience, with 20 million cellphones equipped with TV receivers, followed by South Korea with 8.2 million.

“On Sunday, AT&T Wireless, with 71.4 million phone customers, started AT&T Mobile TV in the United States. The 10-channel service, costing $15 a month, includes Pix, a channel with movies from Sony Pictures. AT&T will sell cellphones made by LG Electronics and Samsung that can receive the TV broadcasts.

Britain is auctioning wireless spectrum this month that could be used for mobile TV. France plans to award a license for a 13-channel mobile video service in June. In Germany, Mobile 3.0, an investor group led by a South African-based media company, Naspers, plans to start a video service this year…”

Now wait a second. Before mobile operators do to TV or movies what the ipod did to music and video (which is shift from collective listening/viewing to individualized on-demand listening/viewing), please watch this absolute gem of a video with filmmaker David Lynch, one of the best American directors working today. (I’m not sure when this was recorded, but it’s arguably one of my most favorite finds on YouTube.)

The Future of Technology: “Charlie Rose by Samuel Beckett”

Saw this on newteevee and it blew my mind (something a video project rarely does). Here’s “Charlie Rose by Samuel Beckett”: a brilliant, rather-eerie, must-see 3min-37sec video by artist/filmmaker Andrew Filippone Jr. (Hitting replay just compounds the experience of a Beckettian loop. A taste of the future of technology.) 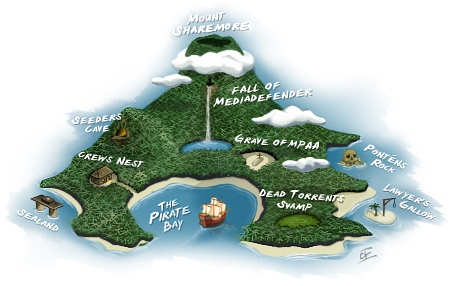 The Pirate Bay, a controversial Swedish group that runs the “world’s largest BitTorrent tracker“, continues its daring and defiant quest to liberate file-sharing on the Internet by launching a new blogging service called BayWords.

Expanding its persistent defense of freedom of speech and uncensored, open-source web, The Pirate Bay started BayWords to provide bloggers with a secure hosting service (using WordPress as its blogging engine) that will not shut down sites due to deviant content. From its manifesto-like homepage:

“Many blogs are being shut down for uncomfortable thoughts and ideas. We will not do that. Our goal is to protect freedom of speech and your thoughts. As long as you don’t break any Swedish laws in your blog, we will defend it.”

Since WordPress (blixity’s host) is based in the U.S., BayWords (like most of The Pirate Bay’s recent activities) is headed for an interesting adventure. In TorrentFreak yesterday, Matt Mullenweg of WordPress seemed cautious:

“WordPress.com supports free speech and doesn’t shut people down for “uncomfortable thoughts and ideas”, in fact we’re blocked in several countries because of that. However as a US-based companies we must comply with US laws, which means if the primary purpose of a blog is distributing illegal material it’s not a good fit for WordPress.com.”

Fortunately, The Pirate Bay has other open-source “No Copyright No License” projects in the works. BayImg is an uncensored image-hosting service, “a place where you can host all your images”. Slopsbox is an email service that protects users’ privacy. And as of May 2007, an uncensored video streaming site to compete with YouTube is apparently on the horizon. We love Pirates!