Kelly Kahl, senior EVP of CBS Primetime, talked about the agreement in February:

Mixed martial arts is one of the fastest growing sports in the country and a wildly popular entertainment vehicle for upscale, young adult audiences [i.e., 18-35 year old males].

Showtime network, part owner of Elite XC, began airing the live fights to cable audiences in 2007. Since both Showtime and CBS are owned by CBS Corp., the expansion into broadcast makes sense. But just last month, Reuters reported that Sumner Redstone, CBS Corp.’s CEO, disagrees with the deal, saying it

…probably was a mistake, not because CBS won’t turn a profit from it but because it is not “socially responsible” to air the typically bloody bouts on free, broadcast TV… I’m a lover not a fighter. I don’t like the sport. 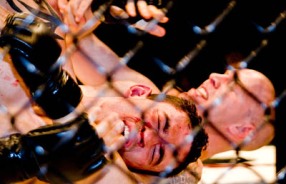 I have to agree with these network heads. Extreme fighting is one of the bloodiest, most violent spectator sports since gladiator fights were conceived as mass entertainment in Rome. Two fighters wearing little more than fingerless padded gloves enter a ring and proceed to knock each other out with a combination of boxing, kickboxing, and martial arts such as jujitsu. Fighters can use their arms, hands, legs, and feet. Based on last night’s broadcast from Newark, many fighters leave very bruised and very hurt. The spectacle is nauseating.

This is CBS’ attempt to increase ratings on Saturday nights when network viewership has declined significantly. I have to ask: why is this kind of violence drawing increasing numbers of viewers in? As much as the majority of Americans now seem to want to stop the war in Iraq, this type of programming begs the question: are we really built for peace? We seem to salivate so much at the sight of bloody warriors.

Photo: Dusten Cook for The Daily Texan Online. The photo shows Matt Thompson taking down Steve Jimenez in an extreme fighting match in 2006.

This entry was posted on Sunday, June 1st, 2008 at 6:54 pm and is filed under Culture, Entertainment, Events, Life, Media, Men, Sports. You can follow any responses to this entry through the RSS 2.0 feed. You can leave a response, or trackback from your own site.